Suara publishes a guide to accompany people with cancer 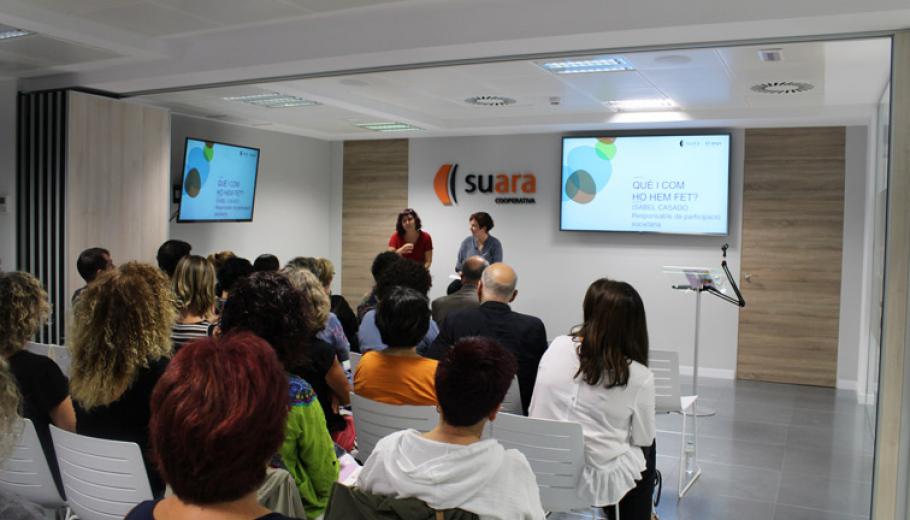 The presentation of the ‘Guide to accompany people with cancer’, organized by Suara Cooperativa at her offices in Barcelona last 9th October, was attended by over 80 people. The event was the culmination of the whole participative work process to respond to and to accompany people of Suara in a serious disease process. The meeting was also one of the events celebrated in 2018 to celebrate the 10th anniversary of Suara Cooperativa, after the fusion of the three cooperatives in 2008.

The opening session was led by the general manager of Suara Cooperativa, Àngels Cobo, who explained why has been created this guide, framed in an ethical and social cooperative as Suara. The general manager of the Cooperative highlighted “the importance to take care of ourselves and to think about how we want to support and to help us on a daily basis”.

The event was also attended by the Responsible of the Participation Area of Suara Cooperativa, Isabel Casado, who explained in which way has been made this guide, which “has a big exercise of empathy to put herself in the position of each person who works in Suara”. Isabel Casado introduced Elisabet Torrents, member of Suara, who explained to the assistants her experience in the application of this guide.

The intervention of the manager of the Catalan Federation of Organizations Against Cancer, Clara Rosàs, explained the current situation of the returning to work after suffering a cancer. The closing session was attended by the president of the Governing Board of Suara, Montse Pujol, who added that “to create the guide has been necessary to listen ourselves and to be critical to think better about how to improve as organization in a complicate process as cancer”.